A Carnival Sweet from the farm San Luigi

Carnival 2016 is about to end, you reveal two tasty recipes dear to us,
that remind us of the sweetness of our childhood.
These treats are very simple but very good, grandmother Lina suggested
the ingredients and the preparation. 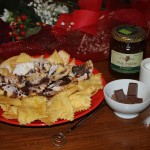 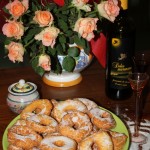 The name of these cakes varies from region to region and even from country to country; in Tuscany
they are called chatter, strufoli, but also rags, lies, in my native country, Castiglione d’Orcia in the province of Siena, my grandmother and her friends called them Crogetti.
Even the use of ingredients has many variations, always in our family we have we use the following:

6 eggs, 6 tablespoons sugar, a sachet of baking powder, half a lemon juice, 1 tablespoon extra virgin olive oil, flour q.s.
Preparation;
Combine all ingredients in a large bowl, adding finally the flour,
mix well until the mixture is suitable to be worked with a rolling pin,
if you have a machine to smooth the dough you can use it.
Roll out the dough and refine according to your liking, then cut into strips,
you can also use a wheel to cut scalloped.

Fry in plenty of olive oil or seed oil.

Turn the Crogetti with a slotted spoon several times, until cooked, then place them
in a tray to drain into the absorbent paper.
Still warm you can sprinkle with sugar or icing, with the delicious Tuscan honey and even with chocolate

(See the three variants in the photo)

The second recipe that we suggest is that of fried Friars, these sweets are typical of Tuscany
but also of Sardinia, the name probably comes from their shape that resembles the tonsure of the friars.

The recipe of farm San Luigi, extrapolated from the cookbook of grandmother;

Combine all ingredients, finally the flour and baking powder, with the dough form small donuts and fry in plenty of olive oil, turn the Friars often with a slotted spoon until completely cooked.
You can enrich to taste with sugar, with the alchermes liquor, or according to your imagination.
(Look the image of the Friars in the photo)

Carnival sweet and Bon appetit to all